Uniquely equipped to survive in a hostile climate, mangrove trees are four times better at fighting climate change than any other trees on our planet.

There is no soil here, only thick layers of mud, full of salt and devoid of oxygen. This is a hostile place for plants to survive.  As the tide flows in and out, the land is intermittently exposed to the burning sun and entirely submerged in seawater.  Anything living here is beaten by strong winds and waves and burnt by the tropical sun.  If you tried to plant a normal tree here it would  drown, burn or suffocate in saltwater.  But life always finds a way. This is where the mangrove grows.

Mangroves are specialised, tropical shrubs and trees that grow in the span between the highest high tide and the lowest low tide.  These trees  have evolved special adaptations to survive extremely harsh conditions.  Some stand on stilt like roots that raise meters above the waterline and some send extra roots down from their branches. Others send pencil-like structures  up and out of the mud like little snorkels to collect oxygen for the starved roots.

Mangroves living closest to the sea have evolved large root systems that anchor themselves and stabilise the mud around them to protect their forest from incoming waves. 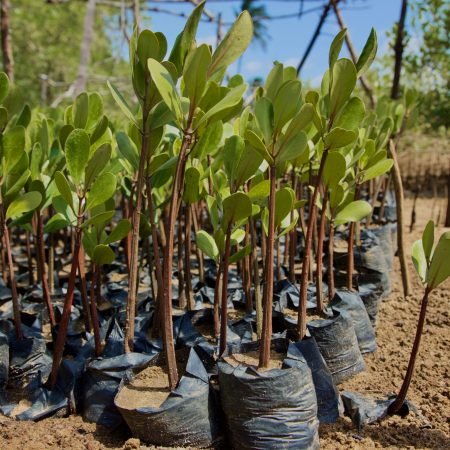 The complex root systems of mangrove forests protect the land behind them by acting like a barrier between land and sea. They reduce the height and energy of incoming waves so that by the time they reach land they aren’t as powerful and destructive. This prevents huge amounts of damage by waves and storms to people’s homes and other valuable infrastructure like roads, schools and farms. This saves entire communities and numerous industries millions of dollars in damage every year.

When a river reaches a mangrove forest it is slowed down by the complex roots of all the trees. This causes the river to drop all of the soils and organic matter it was transporting. In many locations, these soil deposits grow vertically at rates of up to 10mm per year, actually creating more land. This allows local areas to combat the negative impacts of sea level rise and further protect their coastlines from being lost to the sea.

The benefits of mangroves

Coral reefs depend on mangroves

Coral reefs are home to more than 25% of all marine life and mangroves are crucial to their survival. Corals survive because of  microscopic algae that live inside it and use solar energy to photosynthesise, providing their host corals with enough energy to build and rebuild the coral structure.  They also provide corals with their many distinctive colours.

This dependence on the sun for survival means that corals rely on crystal clear water. Mangroves provide corals with just that by acting as natural water-treatment plants. They stand sentinel between the land and sea, stabilising the shoreline to prevent coastal erosion and removing pollutants from the water. Their complex root systems trap everything that would otherwise drift out to nearby reefs and smother unsuspecting corals. Without mangroves, coral reefs will die.

The dark and murky waters surrounding interlocking mangrove roots may not seem like a nice place to live, but it is a perfect nursery for tiny fish. Between the twisted roots, predators can’t get them.  Without mangroves, juvenile fish would be forced out into the reef and open ocean at sizes far too small to escape predation. This would mean fewer fish for people to catch. With mangroves however, fish can grow big enough to venture out onto the reef, where million of fisherfolk in the tropics rely on them to feed their families.

As well as providing crystal clear waters for corals to survive, mangroves also allow seagrass beds to flourish. Seagrass beds act as an intermediate environment for fish between mangroves and the reef. When ecosystems are healthy and well connected, juvenile fish grow up in mangrove nurseries, spend their adolescence in the seagrass before finally venturing out into adulthood on the reef. The long blades of grass and shallow waters in seagrass beds provide more protection for young fish from predators than coral reefs. Many species of juvenile sharks grow up in seagrass beds because they would be too vulnerable out on the reef. The connection of the three habitats: coral reefs, seagrass and mangroves form a crucial connectivity of ecosystems, that million of people depend on. 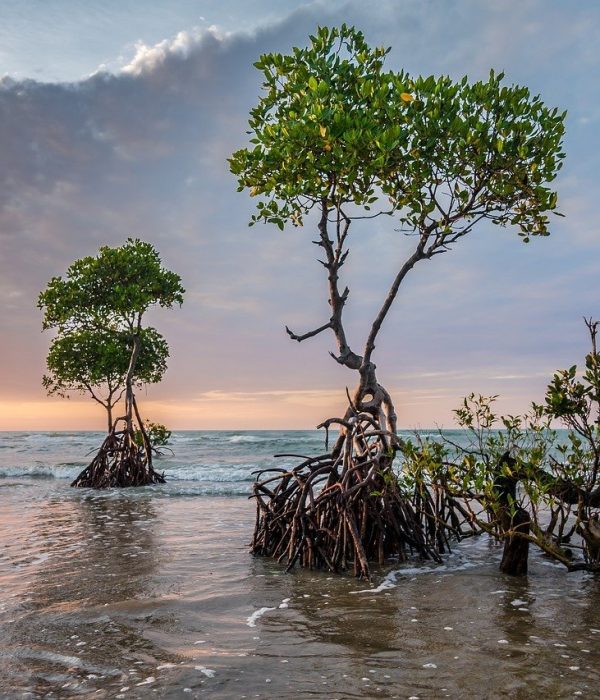 Better than anything else

Greenhouse gases, such as carbon dioxide (CO2) and methane (CH4), are the main cause of global climate change. When we release these gases into the atmosphere they insulate the Earth, increasing its average temperature. We emit greenhouse gases in different way, through transport, industry, production of electricity, animal husbandry and removal of forests and swampland.

Although carbon dioxide is smothering the planet with heat, carbon in itself is  also a crucial building block of life. Trees pull carbon dioxide out of the air, and use it to build their mass. This we call sequestration, and it is the long-term storage of carbon, removed from the atmosphere to slow down global climate change. On land, carbon stored within natural reserves like forests, is called ‘green’ carbon. In the marine environment, it’s called ‘blue’ carbon. Coastal vegetation, such as mangroves, are important blue-carbon reserves. On average, mangroves are capable of storing up to four times more carbon than other tropical forests. This is because their complicated root systems slow rivers and incoming tides, forming large deposits of rich organic material in the deep soils around them.

When a terrestrial tree dies it falls on the forest floor and over a number of years it’s broken down. Microbes turn the wood into soil again, and the carbon it had sequestered is released into the atmosphere once more. Basically it’s only a buffer and we need another tree to take it’s place and sequester the same carbon.  Mangroves are much better at sequestering carbon, because when a mangrove tree dies, it falls into the thick oxygen-deprived mud underneath, where it is preserved and not broken down.  Most of the carbon that was sequestered is never released again. It just keeps going and going. Old mangrove forests are the amongst the densest carbon sinks in the world. The soil here is capable of storing more carbon than most tropical forests have in their biomass and soil combined! Mangroves quite literally slow the tide of global warming, helping protect our planet. In total, the world’s mangroves sequester about 24 million metric tons of carbon in soil per year.

Historically, the majority of tropical coastlines were lined with deep mangrove forests, supporting vast amounts of biodiversity and quietly sequestering carbon, without anyone really realizing how important this way.  Their “dirty” appearance meant that thousands of acres worldwide were destroyed to make room for seemingly more valuable coastal developments, such as shrimp farms, agriculture, marinas, roads and tourism. Research indicates that at least 35% of the world’s mangrove forests may have been lost between 1980 and 2000. Fortunately, this rapid rate of loss has slowed down in the last couple of decades, as governments, local communities, scientists and NGOs have developed initiatives all over the world to stop deforestation activities. By planting trees with us, you can take an active part in reversing this.